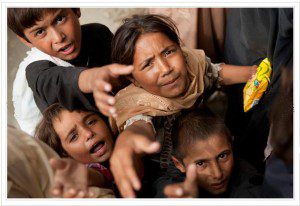 Children in the southern Sindh region reach out to aid workers distributing food. Access to food and clean drinking water is one of the biggest problems facing flood victims.

September 12, 2010: The Conservative government announced Sunday it will continue to match Canadians’ donations to flood-ravaged Pakistan for another three weeks. House Leader John Baird told an Ottawa news conference the government will continue to match every dollar of private donations, extending its original six-week program that was to expire on Sunday. The government’s contribution goes into its own Pakistan Flood Relief Fund, which is distributed to both Canadian and international humanitarian and development organizations.

The UN estimates that the flooding, which began in July after heavy monsoon rains, has affected some 20 million people and left roughly six million homeless. An estimated 1,700 people have died, and doctors and aid workers on the ground in Pakistan fear that number will rise as lingering high-water levels contribute to the spread of respiratory infections, malaria and other ailments.

When the government announced the program last month, donations to flood relief in Pakistan amounted to considerably less than the tens of millions of dollars given by Canadians to relief efforts after January’s devastating earthquake in Haiti.

The Conservatives launched a similar program for Haiti, matching donations Canadians made to registered charities responding to the quake between Jan. 12 and Feb. 12. Canadians donated an estimated $220 million, according to figures posted to the website of Foreign Affairs and International Trade Canada. The government pledged to match those funds with its Haiti Earthquake Relief Fund.