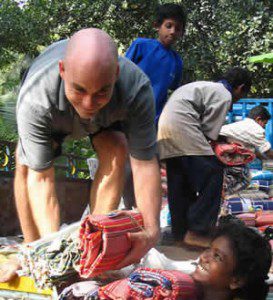 Tragically, in Tupiza, Bolivia. Beloved husband of Tara NEWELL of London. Son in law to Brian and Cheryl Newell of London, and Kay Newell of Creemore, who loved him as their own. Born in Montreal, the son of Andrew Caddell (Elaine Feldman) and Norma Lewis (Tom Cummins).  James was raised near Ormstown, Quebec and later in Cortland, New York.

A decorated soldier and United Nations peacekeeper, James was an accomplished academic and public servant who loved the outdoors, served his country, and had such concern and curiosity about the world around him that he sought to see all of it. He and Tara travelled the world and undertook humanitarian work over the past sixteen months. James was a loving grandson to the late Philip and Elga Caddell, spent summers in Kamouraska, and to Ed CUMMINS and his late wife Ruth in Cortland. He was the best brother to Erin (Charlie,) Chris (Connie) and Siobhan Kelly, Cara and Lucy Cummins in the U.S. and to Emily and Jack Caddell of Ottawa. He leaves to celebrate his life many relatives and Friends around the world. A memorial service will be celebrated in Ottawa later this month.

Donations to Canadian Medical Assistance Teams (www.canadianmedicalteams.org), to support a scholarship fund for children, a cause James cared passionately about.