Residents and shopkeepers wade through a flooded street with their belongings after heavy rains in Peshawar on July 29. (Fayaz Aziz/Reuters – courtesy CBC.ca)

August 4, 2010 – Toronto – CMAT continues to monitor the situation in Pakistan where major flooding from monsoon rains have already killed up to 1,500 people, put over 100,000 at risk for disease and displaced more than 3.2 million. The threat of water-borne diseases is now rapidly rising and millions of people are homeless or cut off in their villages because of the heavy monsoon rains and flooding.

CMAT has received word from its Pakistani partners on the ground, who report that rescue workers are struggling to aid the millions of people affected, especially those in far-flung villages. CMAT members are familiar with the region, having responded and provided medical relief after the devastating earthquake of October, 2005.

This year’s monsoon season which started on July 27, 2010, brought the worst flooding in Pakistan in living memory, causing widespread damage and making many communities inaccessible due to destroyed roads and collapsed bridges. Khyber Pakhtoonkhwa (KPK) (especially many areas of Swat District), Baluchistan and Punjab have been the worst-affected areas. Thousands of people have lost their homes and livelihoods, officials from Save the Children and Pakistan Red Crescent have reported. 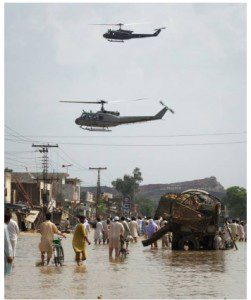 Army helicopters look to distribute relief supplies from the air to the residents of Nowshera. (Adrees Latif/Reuters – courtesy CBC.ca)

Flood hit areas of Swat have limited access to health services. A number of health facilities in certain locations, have been completely destroyed. Furthermore, as many are cut off from main towns in Swat, many communities are unable to access health services when needed, while others can access health facilities but with some difficulties. However, most communities reported that injured and sick community members are not receiving any medical treatment. Pregnant women in particular are facing problems in accessing health services. The most prevalent ailments are diarrhea, respiratory infections, skin diseases and fever.

Hundreds of villages have been submerged across the region that stretches along the southwestern edge of the Himalayas. People are taking refuge wherever they can. Women and children have been seen screaming for help from treetops in the villages of Kot Addu and Layyah, in Punjab, the richest and most populous province. In parts of the province, river levels rose so quickly that villagers had no time to save any belongings.

CMAT will be making a decision shortly whether to deploy CMAT Primary Health Care Teams to the area – please check ou r website often for more updates. CMAT appeals to its supporters for generous donations to help the people of Pakistan.