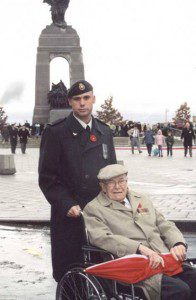 James Caddell and his Grandfather, both Canadian Forces veterans, at the War Memorial in Ottawa.

James Lawrence Caddell, selfless CMAT volunteer, died on October 16, 2005 in Tupiza, a small town in Bolivia. James was only 32 and died of pulmonary edema caused by altitude sickness.

The memorial service will be held in Ottawa on November 5, 2005.

He and his wife Tara Newell had been travelling in Bolivia as part of their around the world tour, which they began in June of last year. In that time they travelled across Australia, toured Hanoi and Angkor Wat, assisted in humanitarian work in East Timor, Indonesia and a tsunami orphanage in India, trekked in Nepal, toured Gallipoli and Jerusalem, dined in Provence and learned Spanish in Buenos Aires and Santiago.

For more information and various photos from their trip please visit: http://www.mcgill.ca/news/2005/spring/action/

James was an incredibly accomplished and devoted person, who spent his adolescence in rural Quebec and small town upstate New York. He joined the Royal Canadian Hussars regiment in Montreal while at Dawson and McGill, and served a tour of duty in Bosnia with the UN in 1995.  He was a Normandy Battlefields Scholar and an intern at Pearson Peacekeeping Institute in Nova Scotia, and earned a Master’s degree from Royal Military College in Kingston. He had been on leave from his job as a Senior Program Manager with Human Resources Development Canada. Just before he left, his new regiment in Ottawa, 2nd Intelligence platoon, presented him with the Queen’s Jubilee medal.

A scholarship fund for the impoverished has been set up in his name. It is called the James Caddell Memorial Scholarship for Orphans.  100% of the funds collected will be used to help orphaned and impoverished children in South India to obtain an education so they will have a chance at life – one of the projects he had planned on starting on his return to Canada.  For more information, please go to www.canadianmedicalteams.org [*For those donating online, please ensure that you specify in the appropriate field that your donation is to be directed to the James Caddell Memorial Scholarship Fund].

For obituaries from the Globe & Mail and Ottawa Citizen, and full size view of the photos above, please see the links below.