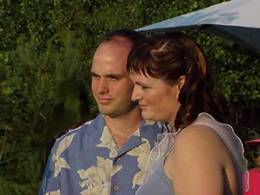 James Caddell and Tara Newell on their wedding day in 2002.

Former Canadian Forces peacekeeper with a taste for adventure who did a tour of duty in Bosnia and performed tsunami-relief work in India was overcome by altitude sickness in Bolivia, writes Sandra Martin.

A year ago last September, James Caddell and his wife, Tara Newell, left their government jobs and set off to backpack around the world. Last Saturday, having trekked through five continents, they arrived by local bus in Bolivia, the poorest country in South America. They stopped in Tupiza, famous for its chunky red mountains and salt lakes, and as the final hideout for Butch Cassidy and the Sundance Kid.

They found a hotel, explored the market and went to a restaurant. Mr. Caddell felt unwell at dinner and went back to the hotel. He jumped in the pool, emerging quickly because the water was so cold, and tried to warm himself in a very hot shower.

Before the night was out, and despite Ms. Newell’s efforts to get him medical help (which included carrying her husband into a local hospital), he was dead.

She thought he had food poisoning or a virulent stomach virus. In the logistical and linguistic nightmare that followed, Ms. Newell managed, with help from the Canadian government, to transport his body to a hospital in La Paz, the capital. That’s where she learned that her husband had died from altitude sickness, accelerated by the rapid changes in his body temperature from the swim/shower routine.

Mr. Caddell, who was extremely fit, had survived a year-long tour in Bosnia as a Canadian Forces peacekeeper. As a couple, they were adventurous but prudent travellers who were well aware of the dangers of altitude sickness. Nine months earlier, he had suffered from altitude sickness on Mount Everest, but that was above 5,000 metres and Tupiza was below 3,000 metres.

Nobody Ms. Newell beseeched for help in the hotel recognized the symptoms. Even worse, there were no oxygen masks or canisters not even in the local hospital.
“In hindsight, it all seems perfectly clear. I was lying next to him while he was suffocating and I didn’t know it,” a heartbroken Ms. Newell said by telephone from La Paz.

His father, Andrew Caddell, a senior policy adviser in the Department of Foreign Affairs, said: “James and I talked a lot about the possibility of him dying abroad as a soldier. He always said, ‘If anything happens to me, I don’t want people to be overwhelmed with grief because it was something I wanted to do.’ And that is how I feel about this trip. He and Tara knew there were risks and they went ahead and did some wonderful things.”

James Lawrence Caddell was born on March 16, 1973, to Norma Lewis, a journalist and communications lecturer (she covered John Lennon’s “bed-in” for peace for the Montreal Gazette in 1969) and Andrew Caddell, one of her former students at Dawson College. As a child, James grew up with his “hippy” mother in the Huntington area of Quebec near the American border and then in upstate New York with her husband, Tom Cummins, and five half-siblings.

James’s father, who was only 20 when his son was born, went on to university and a career in government. He eventually married public servant Elaine Feldman, the mother of his two younger children.

At 10, James reconnected with his father. Writer Denise Chong, who was working for Pierre Trudeau in the 1980s, remembers meeting James and thinking how well-adjusted he seemed, considering his complicated family relationships. As he grew up, James became both a centre point between his father’s and his mother’s family and a bridge connecting their disparate parts.

“He was our cultural and emotional centre,” said Erin Kelly, his oldest sibling, by telephone from La Paz. She and her brother Chris had flown to Bolivia to help Ms. Newell  make arrangements to bring Mr. Caddell’s ashes back to Canada.

After James graduated from Cortland High School near Syracuse, New York in 1991, he moved to Montreal to study at Dawson College and then McGill University. He also joined a reserve unit of the Royal Canadian Hussars regiment. He wanted to honour his paternal grandfather, Philip (Pip) Caddell, a Second World War veteran, and to serve his country because he loved it so much, said Ms. Newell.

At McGill, he enrolled in North American studies, a cross-disciplinary program in history, economics and political science, but later switched to political science and history.  He took a year off in 1995 to train at Val Cartier and to serve in Bosnia with the United Nations peacekeeping forces. This was not a traditional assignment because there was no peace to keep. Consequently, the United Nations altered its mandate to allow soldiers to return fire if fired on and to safeguard protected zones. Mr. Caddell was awarded the Peacekeeping Service and UNPROFOR medals.

In the summer of 1997, he was a Normandy Foundation Scholar, which meant he did a six-week tour of battlefields in northern Europe from Waterloo to the Somme to the D-Day landings in Normandy. He graduated from McGill in 1997 and spent the next year working as an intern at the Pearson Peacekeeping Centre in Nova Scotia, living with his brother Chris in Los Angeles and doing freelance work.

In 1998, he went, as a civilian, to the Royal Military College in Kingston to do a master’s degree in war studies. That is where he met Tara, who was starting a master’s in public administration at Queen’s. Neither of them knew anybody in Kingston, but they kind “of recognized” each other from classes at McGill, said Ms. Newell. In fact, Mr. Caddell knew who she was because he had worked part-time for the Student Society and she had signed his paycheques in her capacity as president.

“He was really smart, really funny and, unlike other men, he was really kind and warm and sensitive,” she said — probably because he grew up with “so many” women. “He was always looking for stability and roots,” while she wanted “to break free” from the stereotypical nuclear family in London, Ontario, with two parents “who had been in love forever,” the dog, the station wagon and an older brother.

They fell in love, moved to Ottawa after they graduated in 2000 and found jobs with the federal government. At the same time, he switched reserve units to the 2 Intelligence Platoon of Royal Canadian Hussars. He never became an officer and referred to himself somewhat ruefully as a “master corporal with a master’s degree.”

Every year, they went on a long canoe trip in Algonquin Park, with Mr. Caddell insisting they go to the “deepest, darkest, farthest corner of the park where they wouldn’t see anybody else.”

In July of 2002, they married and went to Africa for six weeks on their honeymoon. They were both inspired by its diversity, but she was the one who came home with a dream of seeing the rest of the world. Mr. Caddell came up with the savings plan (live on his salary and bank hers) to make it happen. “In our relationship, he was the strategy/ideas guy and I was the logistics/implementer. For some reason, I couldn’t stop dreaming [about the trip] and he put it together for me.”

After seeing Australia and Southeast Asia, they went to Nepal, where they planned to spend Christmas at the last base camp before the summit on Mount Everest. On the way up the mountain, they made a pact that, if one of them developed altitude sickness, the other would continue alone. On Christmas morning, they set off for the base camp at 5,380 metres, but Mr. Caddell became disoriented and the Nepali guide went for help. “It was the second-hardest day of my life,” said Ms. Newell, weeping, explaining that the six hours she spent climbing to the base camp was the longest separation they had had in two years. “I worried the whole time, but when I came back, he was fine.”

The tsunamis hit South Asia the next day. They had already done some relief work in East Timor, but they wanted to do more. They spent two months as volunteers with a Canadian relief agency in the Kannyakumari district of southern India, living with children who had been orphaned by the tsunamis. “It changed everything for us,” she said.

They spent hours talking about the future, his business plans, the orphans they would adopt and their schemes for making the world a better place. “James wanted to come home and be a business success, so he could spend all of his money on charity and support children around the world. I wanted to be in the field, so we had different approaches with the same objective.”

In June, they flew to Brazil and travelled through Uruguay and Argentina, where they studied Spanish for six weeks. “James wanted to go home about Buenos Aires and start having children,” she said, “but I wanted to go as far south as we could go first. He was willing to do it because he loved me and he knew it was my dream.”

They went to Tierra del Fuego, off the tip of South America, and reversed direction. “He was obsessed with turning north,” she said, adding that he was the most patriotic Canadian she had ever met and just moving in a northerly direction excited him. Yesterday, she completed the journey with his ashes.

James Lawrence Caddell was born in Montreal on March 16, 1973. He died of altitude sickness on Sunday morning in Tupiza, Bolivia. He was 32. He leaves wife, Tara Newell; his mother, Norma Lewis his father, Andrew Caddell; and seven half-siblings. A scholarship fund to provide higher education for orphans has been set up in his name with the Canadian Medical Assistance Teams. A memorial service will be announced at a later date.