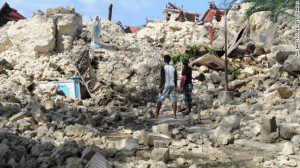 Residents view the ruins of the historic Holy Cross Parish Church in Maribojoc on the central Philippine island of Bohol on Friday, October 18. The death toll has risen above 180 after a magnitude-7.1 earthquake on October 15. (AP Photo)

A magnitude-7.1 earthquake struck the central Philippines on Tuesday, leaving at least 99 people dead and 276 more injured, and rattling many who were celebrating a religious holiday.

The quake, which struck early in the morning, crumbled a number of buildings and sent panicked people streaming into the streets, witnesses said.

The bulk of the casualties — 90 deaths and 166 injuries — came in Bohol province. At least nine were killed in Cebu province and one died in the province of Siquijor, the Philippines News Agency reported, citing the National Disaster Risk Reduction and Management Council.