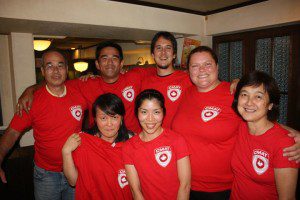 Sunday, September 11, 2011 – Six months ago, on March 11, 2011 a massive earthquake struck off the coast of northern Japan. The earthquake and tsunami that followed caused the death of at least 24,000 people and set off a nuclear crisis which was as confusing as it was frightening. Four months later, CMAT Chair Valerie Rzepka, and CMAT Volunteer Seiko Watanabe returned to Japan to retrieve CMAT equipment which will no longer be needed, and to acknowledge and thank CMAT’s Japanese in-country volunteers. Here are their impressions: 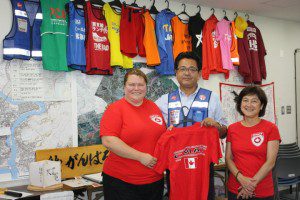 Valerie Rzepka and Seiko Watanabe present a CMAT shirt to the IDRAC Chairman to add to the display.

From the airport, we were picked up by Mr. Motoaki Ishii, one of the Japanese CMAT volunteers who helped our teams in March and April. As we drove toward Ishinomaki, a coastal city about 600km north of Tokyo, we were informed that we could not book accommodation in or near the area as all the hotels and inns were occupied by the tens of thousands of disaster recovery and rebuilding workers. We stayed the first night south of Ishinomaki, then drove through Onagawa and Ogatsu, continuing to the volunteer coordination centre at the university. 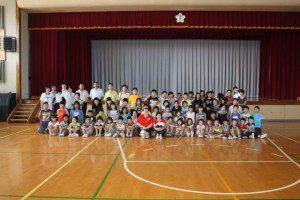 School children from Aikawa were presented with cards from students from the York region district school board, through the Helping Hands campaign.

The University of Ishinomaki has become the new staging quarters for volunteer coordination, run by city of Ishinomaki. We checked in at the new temporary municipal office of Kitakami-cho and visited with one of our municipal contacts, Mr. Konno. The next day, we went to the evacuation centre where CMAT’s high-volume water purification system had been placed in March. The evacuation centre housed the population of the small fishing village of Aikawa. There, we visited an elementary school which now serves the surviving students from three schools in the region, now amalgamated into one school. 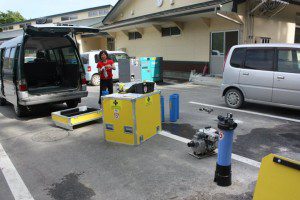 CMAT Equipment is packed up to be returned to Vancouver for storage. The evacuation centre (behind) was being officially closed that day, and evacuees have been moved to temporary housing.

The region of Japan known as ‘Tohoku’ is still suffering in many ways, but we also sensed a tremendous amount of courage and resilience. There are substantial signs of recovery: roads are being paved, bridges have been rebuilt, and most of the debris has been moved. Huge piles of broken appliances, smashed cars, and pieces of construction material from houses remain in fields surrounding Ishinomaki. While most people volunteer their time, some of the survivors have now been hired to work in the cleanup effort as a means to generate temporary income.

In the areas which saw much of the devastation – like Onagawa and Ogatsu, most of the debris has been removed, and there is nothing left, literally nothing, except for the outlines of concrete foundations and some remaining building frames. In Ogatsu, there were no signs of life, no sounds period – it was eerie. In March when teams assisted the Japanese Defence Force with search and recovery, the debris would have been at least several meters high, as now that the debris has been cleared, we weren’t able to walk onto it directly from the bridge.

In Aikawa, we met with two of the community leaders, Abe-san and Konno-san (there are two Konno-san: one is a fisherman in Aikawa village and the other is a municipal representative). The Aikawa evacuation centre was due to close the day after our visit, and resume its original intended use as a daycare centre. Cheerful children’s voices filled the space during our visit.

Community members are moving into their temporary housing, with hopes to permanently rebuild their community. The fisherman Konno-san showed us the urban plans and designs for the new community, which is to be relocated high up on the hill overlooking the sea. He wondered whether it would be possible to rebuild the community as planned, because of the high cost to clear and prepare the land. He and his fellow community leaders are united in their desire to rebuild their community. Abe-san is hopeful to resume fishing and farming soon, as the area is known for the cultivation of sea scallops, kelp and wakame (a type of Japanese seaweed).

The community of Aikawa is very thankful to CMAT and its generous donors for their support. The water purification system was used to purify the water for the communal kitchen and bathhouse in the evacuation centre. They say when we come to visit them next time we will stay at their guest house which they are going to make in the new temporary housing.

On a brighter note, many evacuation centres in the area continue to be closed and the few that are left are in the process of being closed as temporary housing has been completed for most of the communities affected. There is temporary housing in Ishinomaki and surrounding areas, and while some looked vacant, most had signs of life such as laundry hanging to dry, and planters with brightly coloured flowers. These temporary shelters are in the form of prefabricated metal and fibreglass houses, with each unit housing around 10 families. Many evacuees however moved to live with extended family or out of the province. Most people expect to live in the temporary housing at least two years, and they say it will take at least 10 years to fully recover from this disaster.

Mr. Konno, the municipal government representative, said that the assistance provided by Canadians through CMAT gave the area villagers a sense of the global connection and a strong sense of encouragement. The villagers sensed deeply that people around world care for them. Though in its response, CMAT may not have provided a lot of emergency medical care, we definitely provided significant support for the community’s spirit and mental health. Mr. Konno’s office has a project called “Hope”. He said, “Please come and see how we are doing after a year”.

On Friday July 15th, we hosted an appreciation dinner in Tokyo, attended by several of our in-country volunteers, including Yasushi Sato, Sosha Smith, Kana Kobori and Motoaki Ishii. We also expressed our sincerest thanks to Mony Tavakoli, Takeshi Nakajima, Scott and Emiko Ablett, Hideki Morita, Donald Doucette, Sean Hachey and Todd Shea, who were unable to attend. The volunteers received plaques of recognition and a CMAT T-shirt. They were all grateful for being recognized and receiving the plaque but also being able to assist CMAT. They all sent regards to the CMAT Team.

On behalf of CMAT, and the recipients of our assistance, we would like to thank our volunteers for going to Japan, and our donors for their support at such a difficult time to help people of Japan. Though our foot print was small, CMAT made a considerable impact; and the people of Japan are very grateful that we responded.