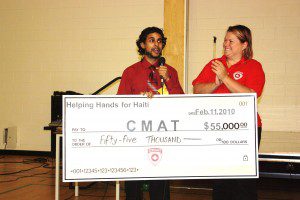 Friday, March 12, 2010 – Markham, Ontario – The Helping Hands Haiti Relief project ran from January 13th – Feb 12th 2010. What initially began as a school project at Donald Cousens Public School in Markham, Ontario was expanded to include other schools in the York Region district school board after Jeewan Chanicka, Director of CMAT’s Helping Hands campaign sent a message out to the system encouraging schools to do what they could. It eventually grew to include 31 schools.

Fundraising events included personal donations and collections from events held at schools such as ‘hat day’. As an added surprise, CMAT was presented with an additional $4000 collected since the end of the campaign, totaling $59,000! 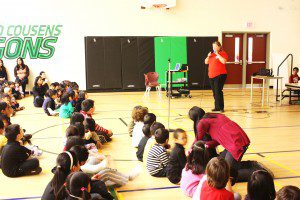 CMAT Executive Director Valerie Rzepka facilitates a phone call between the team in the field in Haiti, and students at Donald Cousens Primary School in Markham, Ontario.

Helping Hands developed as a component of an integrated Geography and English Language program at a public school in York Region District School Board in 2003. This initiative sought to tie the board’s ‘Character Matters’ program with its commitment to inspire and prepare learners for life in our changing world community. It was based on a practical approach to learning and a desire to impart humanitarian values to all students. 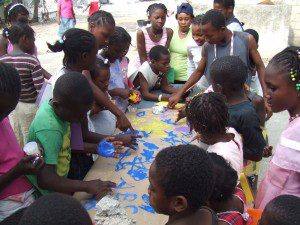 Children at an orphanage in Leogane prepare a thank you banner. 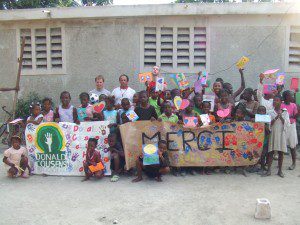 Over the past seven years, Helping Hands has continued to provide opportunities for students to understand relationships between the “have” and “have-not” communities around the world and provide students and school communities with opportunities to directly assist those less fortunate. Each year this initiative continues to grow as more schools become involved and participate.

The January 12th earthquake in Haiti and the resulting devastation led to calls from many schools and communities who clearly wanted to come together and immediately begin to assist with relief efforts. This response was, in part, a reflection of the need to help students and families who were directly affected – students who needed to cope with the loss of family members.

Through direct involvement young people were helped to begin the healing process by having an immediate opportunity to assist. Students not directly affected by the tragedy could better understand how to begin to support their friends and neighbours both through emotional support and direct financial contribution. Schools had the choice to lead the Helping Hands campaign and donate to a charity of their choice or directly to Canadian Medical Assistance Teams (CMAT). 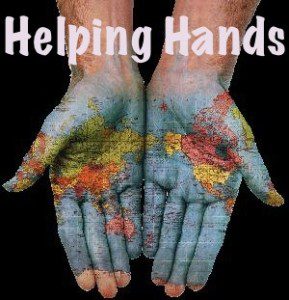 CMAT extends its sincerest gratitude to the York Region District School Board, all of the participating schools, and Mr. Jeewan Chanicka in particular for coordinating this fundraising campaign. Without the support of our generous donors, CMAT volunteers would not be able to provide the level of care that is needed in this time of crisis. On behalf of all CMAT volunteers, THANK YOU!!