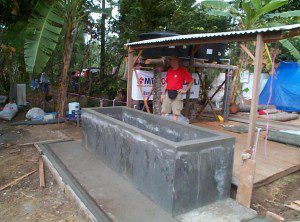 CMAT second team worked with its partner, Mercy Malaysia in the field to build this water cistern which will provide safe water to hundreds of families in Aceh province. (January 2005)

January 23, 2005: CMAT’s second team was taken to Banda Aceh, Indonesia today courtesy of Malaysian Military air transport. In Banda Aceh, CMAT’s team will liaise with U.N. staff and other NGOs to coordinate reconstruction and rehabilitation projects.Meanwhile, CMAT’s first team sent to Indonesia on January 5, 2005 has returned to Canada and has filed a situation report for Meuloboh with Canadian High Commission authorities in Indonesia and Malaysia, and the Canadian International Development Agency (CIDA).The following is their report (a more detailed one will be published later).

Canadian Medical Assistance Team 1 included: 1 Surgeon, 2 Emergency Physicians and 3 Paramedics.
– a second ‘recovery team’ is due to arrive in Kuala Lumpur with pre authorized Indonesian Visas on Thursday.
– Our team was extracted early due to severely reduced flight availability between Medan and Meulaboh starting today.
– within 12 hours of arriving in Meulaboh by Singapore Military Chinook Helicopter, we met with South African and Dutch Medical Teams and were taken by road to Arongon Region (DRIN RAMPAK VILLAGE), approximately 40 kilometres north of Meulaboh.
– This team included, 6 Members of Canadian Medical Assistance Teams, 1 Dutch Physician, 1 Indonesian Medical Student, 2 Nurses.
– During the three hour drive with 9 TNI soldiers and INDO media, we observed very minimal damage to inland villages and no obvious need for medical assistance or other aid. 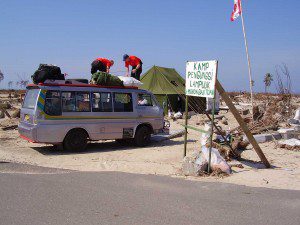 – Arongon Region consists of 27 villages within a 12 kilometer radius. 11 of these villages are totally destroyed including Arongon, Suak Keumeuday, Suak I Beso, Suak Bido, Panti Niutia, Njung Busa, Pribu, Cot Kumbang, Keub, Senebok Lhang, Kubu. Four Villages are partially damaged including Sumantok, Cot Buluh, Drien Rampak, Tepian Perahe.
– There are two local displaced persons camps with 50 – 100 persons located in town and another with 150 displaced persons located 5 km inland.
– Road is currently accessible with 4×4 only, lots of water covering local roads into town.
– Main bridge into area is serviceable.
– There was 1 local Doctor servicing this village previously. He lost his wife and 4 children in Tsunami and will likely not return, leaving the village without medical aid.
– The region was home to approximately 7500 residents, with a loss of about 3500 during the disaster.
– The shoreline was located about 4 KM from our clinic pre disaster and is now only 2 km away with water damage right to the front road of the clinic.
– The main clinic was habitable and we have left a fully stocked pharmacy intact and being managed the South African Team, based in Meulaboh. 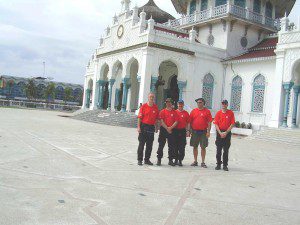 CMAT gives money to officials at the mosque in Banda Aceh, collected by the Muslim Association of Hamilton, Hamilton, Canada for Kurbani (distribution of meat to feed the needy) in commemoration of the Muslim Hajj (Pilgrimage). This mosque had also sustained heavy damage from the Tsunami waves. (January 2005)

– Water is in good condition and locals are boiling as a precaution.
– We treated 450 patients with few being directly Tsunami related. Summary of patients illness include 28 infected wounds, 37 respiratory problems, 28 mental distress and 28 skin related (dermatitis).
– 100+ Tetanus immunizations were given primarily to 10 years old and younger.
– No sign of Tetanus, but approximately 15 – 20 possible Malaria cases.
– 3 orphaned children were seen in the clinic.
– Meulaboh is being well serviced medically. The French have in place many air assets, and are able to insert medical teams into otherwise inaccessible regions and complete medical evacuations as necessary to French temporary hospital facility. US Marines are also working to insert some teams although communication and extraction appears to be a difficult issue.
– Unicef and UN have declared no further requirement for Surgeons or ER Doctors.
– We will be inserting a small team of Child Trauma Counselors and Public Health Nurses who will assist with an immunization program which needs to be formally implemented in the next two weeks.
– The Indonesian government has indicated a desire to remove all NGO’s from Aceh by end of March.
This is a summary of our observations and a detailed report will be prepared and distributed as soon as possible with pictures.