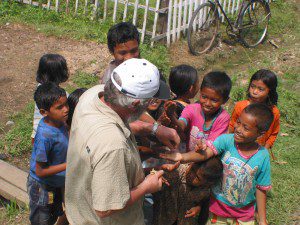 CMAT physician Dr. Dave Ratcliffe from Comox, B.C. hands out treats for the child survivors of the Tsunami in Meuloboh, Indonesia. (January 2005)

January 6, 2005 – CMAT has announced a number of new developments in its efforts to deliver aid to the victims of the Indian Ocean Quake and Tsunami:

Over $50,000 CAD have been raised to date. Much more funding is anticipated with fundraising events being organized throughout the country. CMAT is appealing to the Canadian International Development Agency (CIDA) to be included as part of the Canadian Government’s recent announcement to qualify for 1:1 matching of donations, which presently only applies to the larger agencies (i.e. Red Cross, CARE, World Vision, etc.). 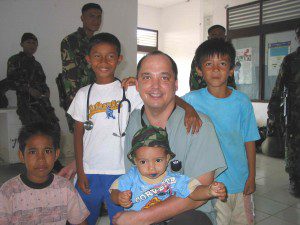 The team is leaving for Kuala Lumpur from Vancouver International Airport on the morning of January 5,2005 and will be carrying 700 lbs of emergency medical supplies and medicines to treat up to 10,000 persons. In Kuala Lumpur, Canadian Consular officials will assist the team in reaching Banda Aceh, Indonesia, where the principal relief mission will be carried out. The CMAT team will establish a base camp near the project site where medical care and first aid will be administered to displaced persons and survey assessments will be performed.

CMAT has secured large donations of medicines and consumables from the Malaysian drug company Pharmaniaga. Canadian Consular officials will also be assisting with the shipment of these supplies to the project site in Indonesia.

CMAT has arranged the shipment of a skid of medical supplies by air cargo (via Skylink Aviation) free of charge. This was made possible through the facilitation of MP Tony Valeri (Liberal House Leader) and his staff. The skid of supplies consisting of gauze bandages, intravenous solution, IV catheters, and other disaster relevant supplies, will be utilized by the CMAT team in Indonesia and will arrive in Kuala Lumpur on January 7, just hours after the team arrives. 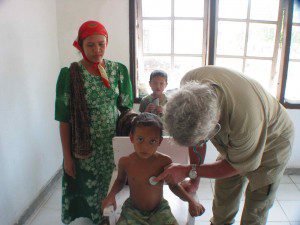 CMAT wired $10,000 USD to its partner agency, Serendib Foundation in Sri Lanka on January 5, 2005. The funds will be used to deliver humanitarian aid to the survivors of the December 26, 2004 Tsunami.

On the in-kind donation front, on January 3, 2005, CMAT prepared 6 skids of medical supplies (4,200 lbs) ready for shipment out of its Princeton, Ontario warehouse. These medical supplies will form CMAT’s contribution to the rehabilitation of the hospitals in Sri Lanka devastated by the tsunami. After an on-line appeal, over 24 volunteers, including two nurses, arrived to help sort the medical supplies. CMAT is grateful to all the wonderful people who braved the cool weather to attend. In addition, CMAT has also readied 8 crates of canned food and toiletries (4,000 lbs), and 7 skids of canned food/clothing (4,200 lbs). CMAT is coordinating shipment of these supplies with the Buddhist community in Mississauga who have offered to include the skids on their container shipment to Sri Lanka within the next week, and at no cost to CMAT.

CMAT continues to require cash donations to support its relief projects and will send 100% of all donations directly into our projects overseas.

Receipts for income tax receipts will be issued. 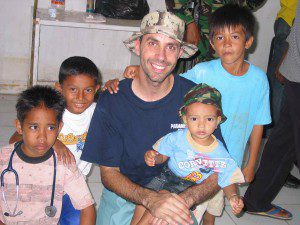