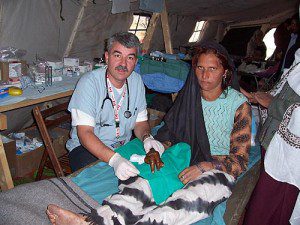 CMAT Field Hospital: A mother who sustained a crush injury to her right hand complicated by gangrene requiring amputation. Her injury was sustained when she pulled one child to safety as her home collapsed.

On Oct. 8, 2005, at approximately 0850 hours, local time, a magnitude 7.6 earthquake struck Pakistan, India and Afghanistan. The epicentre was located near Muzaffarabad, the capital of Pakistan-administered Kashmir, 100 km NE of Islamabad. The earthquake left over 90 000 dead, 120 000 injured and 4 million homeless.

I arrived in Pakistan with a medical team on October 14th, 6 days post earthquake. I spent 6 weeks travelling to areas hardest hit by the earthquake: the North West Frontier Province and Azad Kashmir. Many of these areas were in very close proximity to the Line of Control, which divides the disputed zones of India and Pakistan-administered Kashmir. Our medical team was organized and deployed by the Canadian Relief Foundation, a humanitarian medical relief organization involved in various relief projects around the world.

On arriving in Islamabad, our medical team, consisting of physicians, paramedics, nurses and logistics personnel, toured the emergency departments, wards and operating rooms of the major civilian and military hospitals in the capital city. Our purpose was to assess the volume, type and severity of injuries arriving from the affected areas, and to determine how the hospitals were coping with the massive numbers of injured and what additional resources were needed. Our team also obtained information on which villages, towns and regions the majority of patients were coming from, in order to confirm those areas most devastated by the earthquake.

What we saw was unimaginable. All of the hospitals were overwhelmed with injured patients. At the city’s largest hospital PIMS (Pakistan Institute of Medical Sciences), wards were overflowing with the injured, and the lobby was filled with hundreds of wounded children and adults at various stages of evaluation and treatment, many suffering from head, chest and abdominal trauma, orthopedic and spinal injuries, some in semiconscious states. Chest tubes, intravenous lines and nasogastric tubes were everywhere. Families wept; children cried in pain. It was chaos. In the emergency department, about 150 children were admitted with earthquake-related injuries during the 6-hour morning shift that day. Most of the children came in with head wounds, multiple internal injuries or complicated fractures. Many were on stretchers; most were concussed or unconscious. Many of the injured had received little or no medical attention in the field.

After completing an initial assessment and meeting with various government and military officials including the Canadian High Commission, a decision was made to deploy to the region of Bagh; an area devastated by the earthquake and one designated by the UN in need of emergency medical assistance.

The ruins of Bagh

Bagh, a region of 450 000 residents approximately 60 km southeast of Muzaffarabad and 100 km northeast of Islamabad, lies in the foothills of the Himalayas in the mountainous Kashmir region of northern Pakistan. After a 7-hour drive along often treacherous mountainside roads, we found the city in ruins. No civil administration remained, water and sanitation were in a deplorable state, minimal power or communications had been restored, and 90% of health care infrastructure was destroyed, including the main District Hospital. As we travelled through the city, the stench of bodies decaying in the rubble was overwhelming. Our team established a base camp at the Military Field Hospital on the college campus grounds where 1400 students had died – their bodies still buried under the rubble.

Our mobile medical team then spent the duration of the mission travelling to mountain villages, escorted by the Pakistan military. In many cases we required United Nations or military helicopters because landslides and aftershocks had made the mountain roads impassable. As the army engineers opened roads previously closed by landslides, our team was able to move in to render emergency aid to villagers who had received no medical attention. We treated adults and children with long-bone fractures and dislocations, head injuries (including depressed skull fractures) and psychological trauma. Many children had lost parents and siblings in the disaster, and many children had not spoken since the earthquake. Some of the more serious injuries included pelvic and femoral fractures, some with associated dislocations, and there were many open, grossly infected wounds. Procedural sedation skills, medications and equipment were essential to reduce fractures and dislocations, to perform amputations, and to débride major wounds. Volume infusions and IV antibiotics saved many patients with traumatic hypovolemia, severe dehydration, compound injuries, infected wounds and sepsis.

As with any medical relief mission in a disaster zone, logistics are critical – particularly the logistics of transporting severely ill or injured patients to tertiary care facilities for definitive treatment. Roads not blocked by landslides were often blocked by aid vehicles, making it difficult for our team to transport patients to nearby helipads for evacuation to Islamabad area hospitals. As the days passed, many patients presented to our field clinics and hospitals with pneumonia, gastroenteritis, meningitis and complications from untreated injuries and infections. A desperate shortage of tetanus immune globulin and tetanus toxoid led to 16 confirmed cases of tetanus and several related deaths. Despite UNICEF efforts to vaccinate hundreds of thousands of children, outbreaks of measles and other infectious disease occurred in many villages. We encountered many cases of tuberculosis and acute jaundice – requiring notification of the World Health Organization for disease monitoring and surveillance.

The South Asian earthquake that devastated the Kashmir region of Pakistan was massive, and the emergency medical needs too immense to put into words. My experience as Medical Team Leader in Pakistan was one of the most rewarding of my professional life. Despite the loss of family members, homes and livelihoods, the people were incredibly gracious and appreciative for the aid they received. Villagers offered us chai (spiced milk tea) as a means of saying thank you – a wonderful testament to the human spirit and their ability to confront tragedy. I saw that the skills emergency physicians use every day – particularly our ability to make rapid assessments, perform procedures and initiate treatments – make us uniquely qualified to provide medical aid to victims in disaster zones.