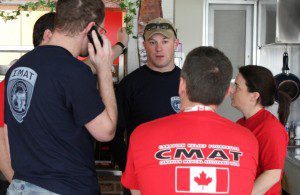 Thursday, March 17, 2011 – Following the return of the rapid assesment team Wednesday from Japan, CMAT continues to stage our response to the earthquake and tsunami in Japan from Vancouver. We anticipate an imminent re-deployment, with medical volunteers who are trained in CBRNE (chemical, biological, radiological, nuclear and explosive) events.

CBRNE events refer to the uncontrolled release of chemicals, biological agents or radioactive contamination into the environment or explosions that cause widespread damage. CMAT Team members who deploy to Japan will have been trained in CBRNE capabilities, common standards, policies and protective equipment.

In order to enhance and sustain Canada’s resilience to CBRNE events, all levels of government within Canada recently collaborated to develop the Chemical, Biological, Radiological, Nuclear and Explosives Resilience Strategy for Canada.

Working with guidance from experts at the Centre for Excellence in Emergency Preparedness, under Canadian Nuclear Safety Commission guidelines and using principles from the CBRNE strategy, all CMAT team members who deploy to Japan will be equipped with personal protective equipment, such as dosimeters, and radiation detectors for the entire duration of their deployment. Other personal protective equipment which the teams will carry includes a full supply of Tyvek coveralls, nitrile gloves, protective eyewear, shoe covers and masks.

Yesterday after returning from Tokyo, the initial rapid assessment team continued to work tirelessly to make contact with emergency response officials in the affected area, and were successful in reaching Disaster Response Officials in both Iwate and Miyagi prefectures, as well as Japanese Ministry of Foreign Affairs. With their authorization and guidance, CMAT plans to deploy its medical team to underserviced areas in the affected regions.

In discussions with Japanese officials, they report that in addition to medical support, there is a desperate need for food and clean, potable drinking water. CMAT continues to appeal for donations to help purchase a Nomad water purification system. This water purification system would be able to provide a community with a population of over 30,000 with clean drinking water daily.

Centre for Excellence in Emergency Preparedness

Continued PreparationsCMAT prepares for deployment of its Field Hospital Tuesday to disaster ravaged...
Scroll to top