Meet some of the inspring CMAT volunteers who help us fulfil our missions in communities around the world! 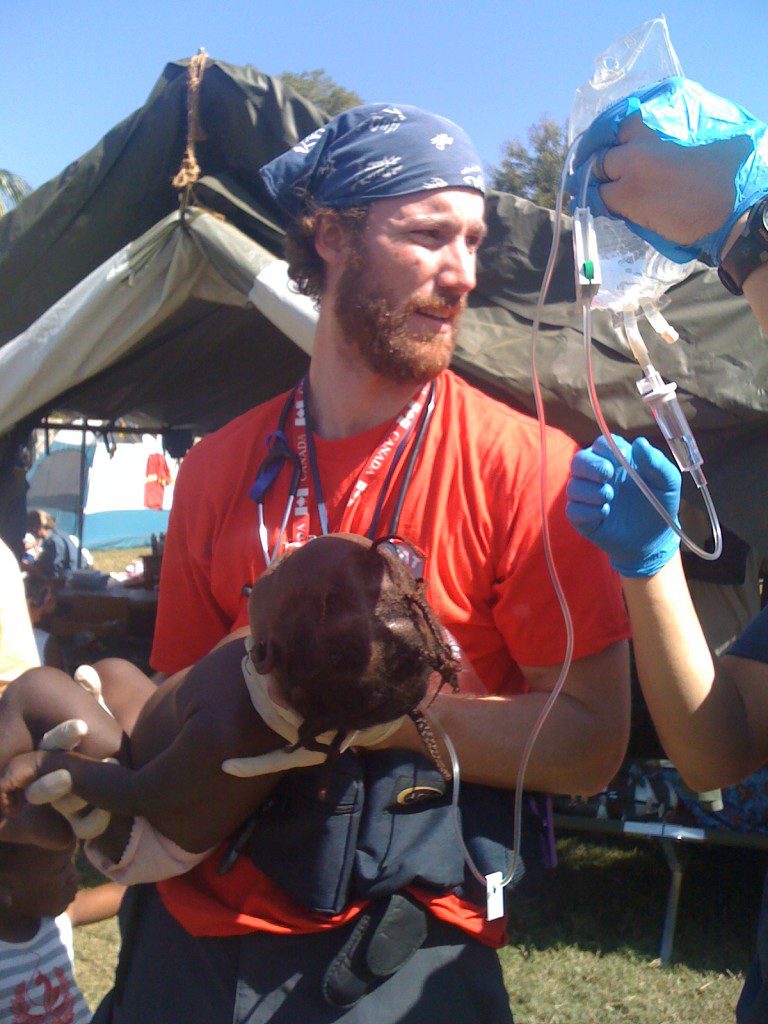 CMAT volunteer Aric Rankin has always understood the importance of lending a helping hand, especially in times of need.

When the earthquake struck Haiti in January 2010,  Aric spent several weeks in Léogâne as part of the first CMAT medical team, providing medical care to earthquake survivors in the CMAT field clinic.
“In that deployment, I helped a man in his early 30’s who had suffered a crush injury to his hand.  His left hand, and in particular his ring finger was swollen, with his wedding band  still on,” he explained. “He had lost his wife and children in the earthquake, and the wedding band was all he had left to remember his family.  After nearly 90 minutes in the sweltering sun, using suture material, dental floss, vaseline, some elbow grease and a lot of patience, we were able to save both this man’s finger and the wedding band in one piece. He was in tears and repeatedly thanked us in Creole.”
Recalling this story brings up strong emotions for Aric.  He had planned to propose to his then-girlfriend Michelle in January 2010, but due to the immediate nature of CMAT’s deployment, he postponed popping the question until he returned home in February.  He and Michelle got married in the summer of 2010.   “Michelle has been there every step of the way.  She has helped me raise funds, gather donations of supplies, pack for the adventures, and most importantly she has kept me mentally strong with her love, support, humour and unbelievable patience.  The whole deployment was definitely a challenging but rewarding experience as we treated between 100 and 200 people every day,” said Aric.
Aric joined CMAT in 2005 by answering a call for volunteers sent out via the Registered Nurses’ Association of Ontario. He visited the CMAT website and attended a Sphere Minimum Standards training and Mobile Field clinic demonstration in Toronto in 2006. It was there he made lifelong connections, and continues to be involved with CMAT to this day.  Aric is now one of CMAT’s accredited Sphere instructors, and also volunteers his time locally with CMAT, by helping with fundraising efforts and assisting with warehouse inventory management.
Aric is a Nurse Practitioner from Hamilton, Ontario.  He completed his Bachelor of Science in Nursing in 2005, and his Masters of Nursing and Primary Health Care Nurse Practitioner in 2013 both at the University of Windsor.  He currently divides his work time between De Dwa Da Dehs Nye>s Aboriginal Health Centre in Brantford, Ontario; Canadian Health Care Agency working in nursing stations at Northern Ontario First Nations reservations, and in the Emergency Department of Hamilton Health Sciences McMaster campus.
To apply to volunteer with CMAT, please visit www.canadianmedicalteams.org/volunteer
Next:  Brandon Duncan, RN >>
April 6, 2014/by Valerie Rzepka
https://cmat.ca/wp-content/uploads/2021/04/CMAT_512-300x300.png 0 0 Valerie Rzepka https://cmat.ca/wp-content/uploads/2021/04/CMAT_512-300x300.png Valerie Rzepka2014-04-06 21:51:492014-04-07 22:27:02Meet CMAT Volunteer Aric Rankin, NP!